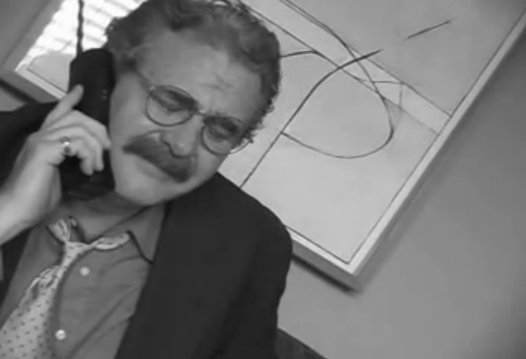 After the title sequence, Scientologist Diane Wheat (played by Carole Smith) is seen in an auditing session with the head
of her local church, Robert Solomon (Bill Baker). Diane describes her trouble with finances and having her car repossessed.

The next day, Robert has Diane model her financial difficulties in clay. She is worried that her other financial obligations
keep her from moving up Scientology's "Bridge to Total Freedom". Robert tells her that she can work at the church in exchange
for services to move up "the Bridge".

Parallel to these events, Richard Grey (played by Tom Padgett) is trying to contact his daughter Amy at the Flag Land Base in
Clearwater. Church employees refuse to allow him to speak to her because, unbeknownst to him, he has been declared a "Suppressive
Person". He arrives at the local church on Saturday seeking more information. Diane, who is working as a receptionist, hands him
a copy of the ethics order declaring him a Suppressive Person, and he leaves.

The next day, Diane is working at the church again when two teenage girls arrive. The girls have seen the South Park episode
"Trapped in the Closet" and want to attend a service for their own amusement. Diane tells them that the church does not have
Sunday services, and shows them a promotional film for Dianetics instead. At home, Richard is reading the Operation Clambake
and Lermanet.com web sites when he receives a panicked instant message from a friend.

The friend tells him to watch a news report from Clearwater, and he learns that Amy has died after falling from the Fort Harrison
Hotel. Shortly afterward, Robert calls Richard and informs him that he may not attend the funeral because Amy and her mother have
disconnected from him. At a celebration of L. Ron Hubbard's birthday, Robert announces that Diane has attained the state of Clear
and gives her a Clear bracelet. After the celebration, he takes the bracelet away (but reminds her that she may purchase one of her
own as they are not free) and shows her a film that encourages her to continue on "the Bridge" by taking the Operating Thetan courses
at Flag.

Late in the night, while Diane is cleaning, a distraught Richard comes by and asks if he can talk to anyone about being allowed into
the funeral service. She refuses, but Richard insists on dropping off some old Scientology books and tapes that used to belong to Amy.
Diane listens to one of Amy's cassettes from the high-level Clearwater Scientology center and hears a man's voice speaking scoldingly
about being "willing to talk to the auditor", in an impenetrable jargon laden with nonsense words.

In the final act, protesters are seen outside the church loudly picketing over the death of Amy. When Diane walks out to confront them,
they ask her to step outside the church gate and proceed to tell her the story of Xenu and the Wall of Fire from Operating Thetan level
3 (OT III). Robert notices Diane outside the church, tells her to go back inside, and threatens the protesters, but not before they have
finished telling her the story. Once Diane is back inside, Robert runs her on a security check to determine whether she has any doubts
or ill will toward Scientology. Richard calls Amy's mother, who is still in Scientology and asks to be allowed at the funeral. She refuses
and ends the call to avoid being sent to ethics. In the evening, Robert reminds Diane of the need to continue up "the Bridge", and mentions
the Wall of Fire at OT III.

That night, disillusioned after returning to a room which earlier she was prevented from entering (being told it is a fully furnished office
for the return of L. Ron Hubbard) and discovering it is merely a closet, Diane walks out the door of the church and leaves Scientology.

The film ends with a written dedication: "For all who speak out; for those who have been silenced."


Site design and administration by Warrior